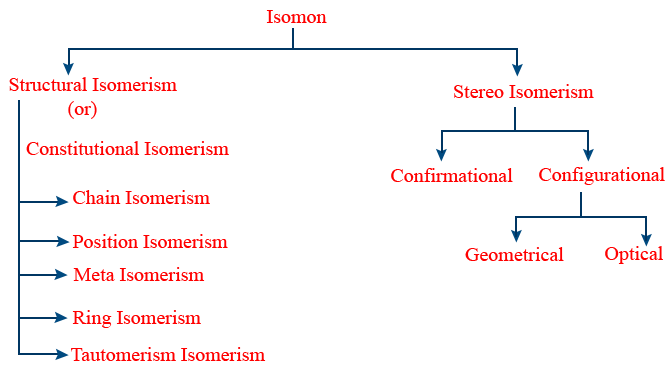 To exhibit chain isomerism, compound should have minimum '4' carbons.

Position Isomerism:
The isomers which differ in their position of functional groups (or) substituents (or) multiple bonds.
Ex:

Functional Isomerism:
The isomers which differ in their functional groups are called functional isomers.
Ex: Alcohol and ethers (CnH2n+2 O)
CH3—CH2—OH and CH3—O—CH3
Cyanides and Isocyanides
CH3—CN and CH3—NC

Metamerism:
The isomers which differ in their alkyl groups which are linked to the functional groups
Ex: C—C—O—C—C Diethyl ether     C—O—C—C—C methyl propyl ether

Tautomerism (Desmotropism)
Desmos = bond
tropism = turn
The Isomers which are in equilibrium state and they are inter convertible by transfer of hydrogen are called Tautomers.
Ex:

Stereo Isomerism:
The isomers which differ in their spatial arrangement of atoms (or) groups are called stereo isomers.
1.Geometrical Isomerism: (Cis-Trans Isomerism)
Isomerism arises mainly due to restricted rotation of {C=C}bond.

Note: The groups of the double bonded carbon should be different

(iv) If molecule has any symmetry, which is superimposable on its mirror image is called Achiral.

Enantiomers:
The stereo isomers which are mirror images to each other are called enantiomers.
Ex:

Diastereomer:
The stereo isomers which are non mirror images to each other are called diastereomers
Ex:

Meso Compound:
If molecules of half part is mirror image to the remaining half and it has a plane of symmetry to molecule is called meso compound.

Meso compound due to internal compensation it is optically inactive.

Racemic Mixture:
Mixture containing 1:1 ratio of d and l (dextro and laevo) called racemic mixture (±1)
It is optically inactive due to external compensation formation of racemic mixture is called Racemisation.